Xiaomi, Redmi have increased phone prices to counter hike in GST from 12% to 18%

The new prices have come into effect already with the company promising them to start updating them on Mi.com soon.

Chinese phone maker, Xiaomi, appears to have buckled under the pressure and announced a price hike on it Mi and Redmi branded phones in the country. The new prices have come into effect already with the company promising them to start updating them on Mi.com soon.

The company explained that the step has been taken after factoring in the 50% jump in GST recently announced by the government. The increase in GST on mobile phones now sees the rate being increased from 12 per cent last financial year to 18 per cent from April 1, 2020.

The company further informed that the move to increase the price of their phones was being taken after much deliberation and to maintain the company's policy of more than 5 per cent margin on their phones and other hardware products.

After much deliberation & in keeping with #Xiaomi policy of maintaining <5% margin on our hardware products,we will be increasing prices of our products.

New prices will be effective immediately. Thank you! 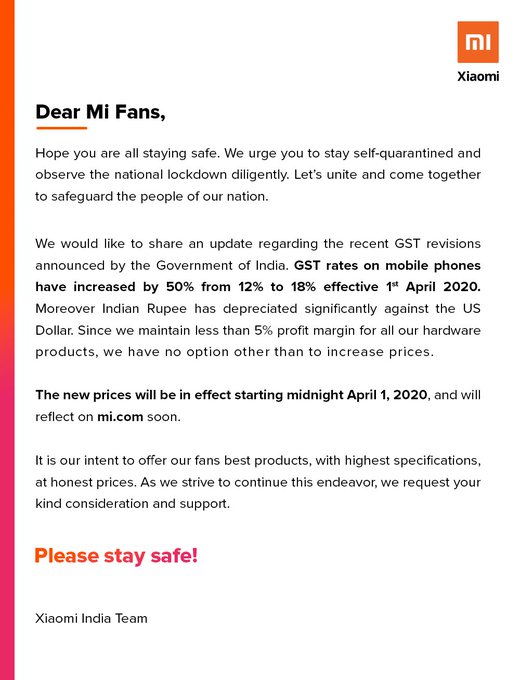 1,130 people are talking about this

The move comes after the GST Council, headed by Finance Minister Nirmala Sitharaman, hade earlier, increased GST on smartphones from 12 per cent to 18 per cent. The India Cellular and Electronics Association (ICEA) had previously warned that the move is bound to see many phone makers increase the prices of their products in the country.

While it is not clear how much the prices will increase for now, when combined with the weakening rupee against the dollar, the price hike could be between 5 to 10 per cent. Pankaj Mohindroo, ICEA chairman had also told IANS last week that the 6 per cent GST increase will be detrimental to the vision of digital India. Consumption will be stymied and our domestic consumption target of $80 billion (Rs 6,00,000 crores) by 2025 will not be achieved as India will fall short by at least Rs 2,00,000 crores.

ICEA, in a letter to the Finance Minister, wrote that the mobile handsets sector was already in deep stress due to supply-chain disruption happened after coronavirus outbreak in China. The GST rate increase will affect the market adversely. The industry body said that it was the most inappropriate time to increase the GST.

iPhone 9 could launch in India soon with an amazing price...

COCOMI dismisses its move to boycott the Sangai Festival

The United Naga Council (UNC), an apex body of the Nagas in Manipur, has advised...

Thousands of Nagas in Manipur Tuesday took out a peace rally in Naga-inhabited areas...