The action was taken after a video of the women shouting “We reject CAA” from the roof of their building located in Delhi’s Lajpat Nagar 2 went viral on social media.

Surya Rajappan, who was evicted from home

An advocate hailing from Kerala and her flatmate have been evicted from their home in New Delhi for raising slogans against the Citizenship (Amendment) Act (CAA) and the National Register of Citizens (NRC) during Union Home Minister Amit Shah’s door-to-door campaign on Sunday. The action was taken after a video of the women shouting “We reject CAA” from the roof of their building located in Delhi’s Lajpat Nagar 2 went viral on social media.

“This was the only opportunity when my voice could be heard by Amit Shah directly,” Surya Rajappan, who is an advocate at the Delhi High Court, tells TNM. “It was a very spur of the moment thing; it was not pre-planned or anything. When we realised that he was coming, we thought that it would be a once in a lifetime opportunity. There was no other way. If he was coming, and I had not done it, I don't think my conscience would have been clean.”

A Resident of Lajpat Nagar 2 shouted 'We reject CAA" while union home minister #AmitShah was taking out a door to door campaign to spread awareness about #CAA2019 in the area today evening. 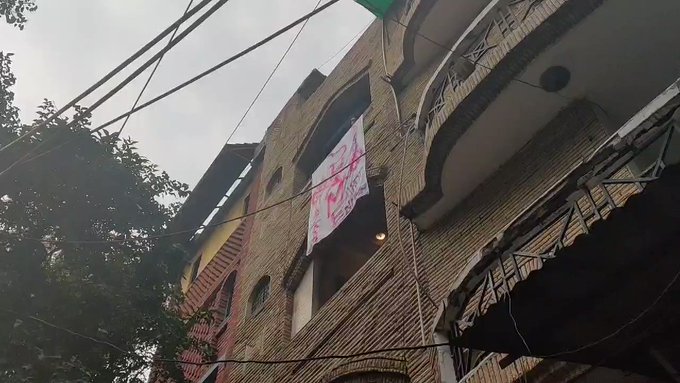 However, the moment they shouted the anti-CAA slogans, a group of people on the streets, that was reportedly accompanying Amit Shah, began to shout ‘Bharat mata ki jai’ slogans in response. Surya has issued a detailed statement on what followed, describing how an angry mob ran up to their apartment and threatened to break the door down.

A mob of around 150 people collected on the street below our apartment. They were evidently enraged and threatened by the simple act of two girls protesting peacefully to tackle what they perceived as an obvious threat to their propaganda parade. The protest banner that we had hung from our balcony was torn and taken away,” Surya writes.

A group of people then forced their way up the stairs to their apartment and fearing for their lives, Surya says they bolted themselves inside their home. The mob kept banging on their door and shouting till the police came and intervened.

However, their ordeal was not over yet, Surya writes.

“The common entrance which led to the stairway of our house was locked and bolted by our landlord (who was part of the angry mob) and we were trapped in the house and unable to leave. Terrified, we called our friends to come and help us. When they arrived at the scene, the angry mob pushed them around and threatened them with more physical violence and refused to let them enter the house to come meet us,” she says.

Surya adds that she and her flatmate, who wishes to remain anonymous, were trapped inside their house for around seven hours, and only later, Surya’s father was allowed to enter along with a police officer. Meanwhile, her landlord informed her that she had to vacate the house although their lease is yet to expire.

“After a period of seven hours, the door of the stairway was finally unlocked and we were allowed to leave the premises under the protection of the police. We packed our essentials and left,” Surya says.

Speaking to Indian Express, the landlord, who did not wish to be identified, called the incident “an inconvenience to everyone”. When asked why he had evicted the two, he said, “I shouldn’t have made them my tenants in the first place.”

Surya, who has been a resident of Delhi since her parents moved from Kerala years ago, says that she and her flatmate are now looking for accommodation and will most likely not be returning to their Lajpat Nagar 2 residence. They have also filed a police complaint against the mob that threatened them.

Iran Will Welcome Any Peace Initiative By India For De-escalating Tensions With...

7 tips for staying healthy over winter

Amit Shah : Issues Of All Northeast Rebel Groups Will Be...

The Redmi Note series has been massively popular so far in India, where everyone...

The Arvind Kejriwal-led party is set to win 63 seats as counting of votes neared...

The gangster attempted to flee and snatched the weapon of a Police constable, after...

Despite Covid-19, India contributed 9.8 per cent of the total global analytics job...

Filmfare Awards Guwahati : Here is the List of Bollywood...

Guwahati is all set to host the prestigious and most glamorous cine awards, Filmfare...

The Constitution's Article 256 says that states are obliged to comply with the laws...

China releases ‘Solemn Apology’ to Family of Doctor Who...

In death, Li became the face of simmering anger at the ruling Communist Party's...