The women say they were threatened by a mob after they put up a protest banner outside their balcony during Amit Shah’s visit to Lajpat Nagar.

Two women were evicted from their rented home in Lajpat Nagar for holding up a banner protesting against the Citizenship (Amendment) Act during Amit Shah’s rally in the area. One of the women, Surya Rajappan, an advocate from Kerala, has claimed that in response to their protest, a mob of close of 150 people threatened them and attempted to barge into their house.

In a statement to the Indian Express, Surya Rajappan said:

“When we became aware of Shah’s pro-CAA rally, we exercised our constitutional and democratic right to protest. As a common citizen, this was the perfect opportunity for me to register my dissent in front of the Home Minister. I believe that if I had failed to do so, I would have failed my own conscience.”

Rajappan also said that the banner displayed from their balcony read, ‘Shame; CAA and NRC, crossed out; Jai Hind; Aazadi and #NotInMyName’ and that the two had made a conscious decision to ensure that there were no derogatory words or phrases.

What happened when two women displayed an anti-CAA banner from their apartment balcony in Lajpat Nagar, when Amit Shah‘s door-to-door campaign for CAA went through their lane.

Statement by one of them: Surya Rajappan 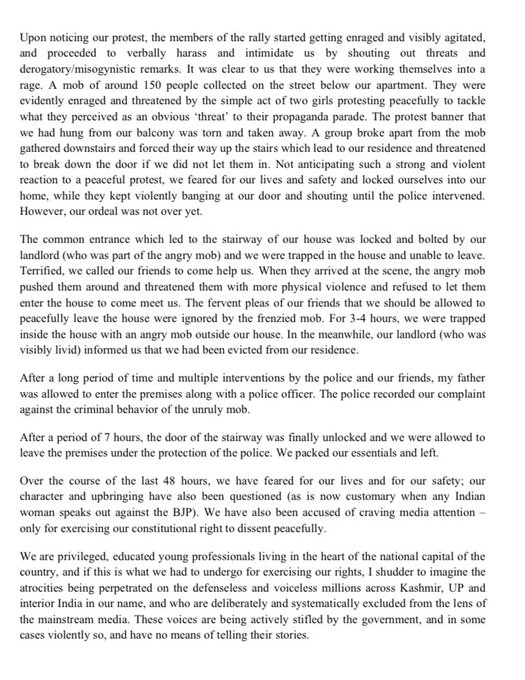 Rajappan further said that in response to their protest, members of the rally were visibly agitated, and proceeded to harass and intimidate the two by shouting threats.

“A mob of around 150 collected on the street below our apartment. The protest banner was torn and taken away. A group forced their way up the stairs which lead to our residence and threatened to break down the door if we did not let them in. Not anticipating such a strong and violent reaction, we feared for our lives and safety and locked ourselves into our home, while they kept violently banging at our door and shouting until the police intervened,” she said.

this young girl in Delhi shouts " go back #Amitshah" as @AmitShah reaches there as part of BJP's door to door campaign on #CAA, reports @vssanakan @manoramanews #Janjagranabhiyan #CAA_NRC_Protest

“However, our ordeal was not over yet. The common entrance which led to the stairway of our house was locked and bolted by our landlord, who was part of the angry mob, and we were trapped in the house and unable to leave. Terrified, we called our friends to come help us. When they arrived at the scene, the mob pushed and threatened them with more physical violence and refused to let them enter the house. For 3-4 hours, we were trapped inside. In the meanwhile, our landlord informed us that we had been evicted from our residence.”

After multiple interventions by the police and friends, Rajappan’s father was allowed to enter with a police officer who recorded their complaint. After seven hours the women were allowed to leave under the protection of the police after the door of their stairway was unlocked.

“We packed our essentials and left,” she wrote.

Speaking to the Indian Express, the landlord, who did not wish to be identified, said that he had no clue where the women were and that the incident was “an inconvenience to everyone”. When asked why he had evicted the two women, he said, “I shouldn’t have made them my tenants in the first place.”

Source : The Wire with TKT inputs

A Cheque Amounting Rs. 6 lakh Received From Muslims As...

“What has driven the Naga people far away from Ravi is his deceptive manner of handling...

Notification for recruitment of Group C & D in PHED, Manipur...

Notification for recruitment of Group C & D in PHED, Manipur 2019

Covid pandemic has made a new turn with possibility of community transmission in...

Situated in Karnataka, the thriving tourist destination is full of splendid monuments,...