Udit Narayan wants Neha Kakkar to be Aditya Narayan's Daughter-In-Law. But what.....

Aditya's mother Deepa Narayan tries to convince Neha Kakkar so that she becomes the bahu of Narayan khandan. Later, both families agree.

Famous Bollywood singers, Udit Narayan and Alka Yagnik will be gracing the stage of Indian Idol season 11 this weekend. In the latest promo, the host of the show Aditya Narayan's father Udit Narayan can be also seen accompanied by his wife Deepa Narayan.

One of the judges of the show, Neha Kakkar's parents can also be seen in the video. A fun-filled banter continues between both Udit Narayan and Neha Kakkar. Udit starts teasing Neha, he says there is another reason to come on the stage. Then he says that he wants to make Neha his daughter-in-law. Aditya's mother Deepa Narayan tries to convince Neha Kakkar so that she becomes the bahu of Narayan khandan. Later, both families agree.

Check out the video here: 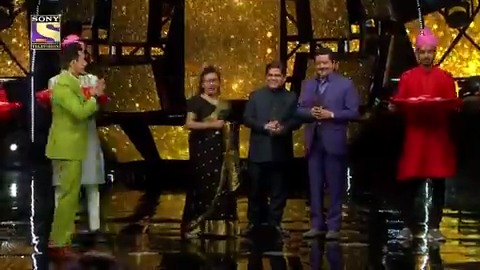 After hearing all this, Aditya Narayan seems to be very happy. Then Neha says that if she agrees to marry him so early in the season then there would be no fun left for her.

After that, Udit Narayan can be seen saying that all the contestants of the show are extremely talented and he has been following the Indian Idol season 11 since day one.

Further, Neha Kakkar was earlier in a relationship with actor Himansh Kohli. They met on the sets of the film Yaariyan which was Himansh’s Bollywood debut film.

Viral Photos of Sex Toys, Private Items and Condoms at JNU Hostel are Fake. What...

Refusing to accept 10 rupee coin may lead to imprisonment...

Here's the 20 Financial Resolutions to make in your year...

Public can continue to accept 10 rupee coins as legal tender...

PAK has limited options to respond to India's decision...

According to CRS, the long-standing US position on Kashmir is that the issue should...

The model code of conduct for the by-elections scheduled to be held for five assembly...

In a disturbing video of the attack, two healthcare workers dressed in light blue...

The Most Reliable Name in House Cleaning, Housekeeping...

The Most Reliable Name in House Cleaning, housekeeping labour service provider in...

No need for additional wheels in cars with tubeless tyres:...

This is as per the international standards which will enable more space which may...

Iran has announced another 123 deaths from the new coronavirus, bringing its overall...