Though there is no new Avengers' movie releasing anytime soon, but seeing the all-time high popularity of the franchise, this special edition theme is certainly expected to gain attention from the scooter enthusiasts.

The TVS Ntorq Avengers edition scooter with liveries commemorating Iron Man, Captain America and Black Panther have been launched today. Price of the Avengers Edition Ntorq starts from Rs 77,865. This is the most expensive Ntorq ever. Existing Ntorq is priced at Rs 68,385 while the Ntorq Race Edition is priced at Rs 74,865. All prices are ex-sh. Take a look at the Ntorq Avengers Edition in the video below. Festive season is about to kickstart in India soon and a number of automakers are introducing new and exciting products in a bid to gain customer sentiments and push for higher sales this season. TVS Motor on Tuesday introduced a limited edition NTorq 125 in the market christened 'SuperSquad Edition' which features a special 'Marvel's Avengers' paint theme. The new scooter has been priced at ₹77,865 (ex-showroom).

The NTorq is already a very popular scooter in the 125 cc segment space and TVS has announced in the past that it has managed to retail over five lakh units of the NTorq 125 scooters till date. Though there is no new Avengers' movie releasing anytime soon, but seeing the all-time high popularity of the franchise, this special edition theme is certainly expected to gain attention from the scooter enthusiasts.

Save for a different paint scheme, the limited-spec NTorq 125 'SuperSquad Edition' remains unchanged. It comes based on the Race Edition which gets standard LED headlamp. 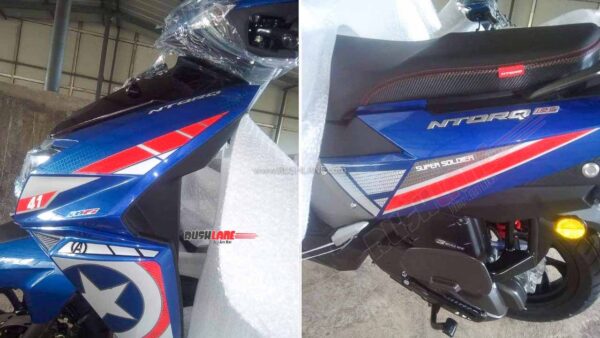 In terms of mechanicals, the scooter employs the same 124.8 cc single-cylinder engine with fuel-injection technology. This unit is capable of returning 9.1 PS of maximum power at 7,000 rpm and 10.5 Nm of peak torque at 5,500 rpm. In comparison to the previous BS 4-spec unit, the new engine delivers 0.1 PS less output, while the torque remains the same. The powertrain comes mated to a CVT unit.

One of the key highlights of the scooter include its Bluetooth connectivity system which is capable of pairing with a smartphone app. For reference, the 'Race Edition' model currently costs ₹75,365 (ex-showroom, Delhi).

India Missiles : List of Missiles That India Tested In The Past Two Months

You can Check Out This New Feature-Rich 125cc Suzuki Saluto...

Myanmar has examined as many as 45 suspected cases, but none has tested positive...

The new KTM 200 Duke comes in two colour options with refreshed graphics. It is...

The new Covid-19 care centre is an addition to the 100-bed isolation wards at Jawaharlal...

The prohibitory orders in Moreh town, which is close to the Indo-Myanmar border,...

So what does the iQOO 3 have that others don't? Why is it a 'monster' device? Today,...

The death of the infant comes a day after a pregnant woman, from Noney district, ...