This Super Moon will be visible Wednesday across the Pacific — offering the best viewing — as well as the western half of North America, bottom of South America and eastern Asia.

People around the world stayed up Wednesday to watch a cosmic event called a super blood moon, a combination of three celestial phenomena — Lunar Eclipse, Blood Moon and a Flower Moon. The Bloodmoon visible today will be one of the biggest of the year.

This Super Moon will be visible Wednesday across the Pacific — offering the best viewing — as well as the western half of North America, bottom of South America and eastern Asia.

It also happens to be the first total lunar eclipse in more than two years. According to Nasa, "Compared to other Full Moons in 2021, the Flower Moon will have the nearest approach to Earth, making it appear as the closest and largest Full Moon of the year. This big moon seen in the skies is called Supermoon."

A Total Lunar Eclipse happens when the Sun, Earth, and Moon are aligned in a line. During the eclipse, the Earth comes in between Sun and the Moon blocking sun rays from reaching the Moon, casting its shadow on the lunar surface.

The Earth's shadow that falls on the Moon is divided into three parts Umbra, the darker, central part, Penumbra, which is the outer part of the shadow and Antumbra, the partly shaded area beyond the umbra.

1The lunar eclipse as seen in United States The lunar eclipse progresses is seen behind a ferris wheel over Santa Monica Beach in Santa Monica, California, Wednesday, May 26, 2021. (AP)

Some places in the Pacific and East Asia got to see the show before midnight, while night owls in Hawaii and the western part of North America got to watch it in the early morning hours.

Sky gazers along the US East Coast were out of luck because the moon was setting and the sun rising. The color of the moon during the total eclipse can appear different depending on where people are in the world and also depends on other factors like weather and the amount of dust in the atmosphere.

3The view from Indonesia 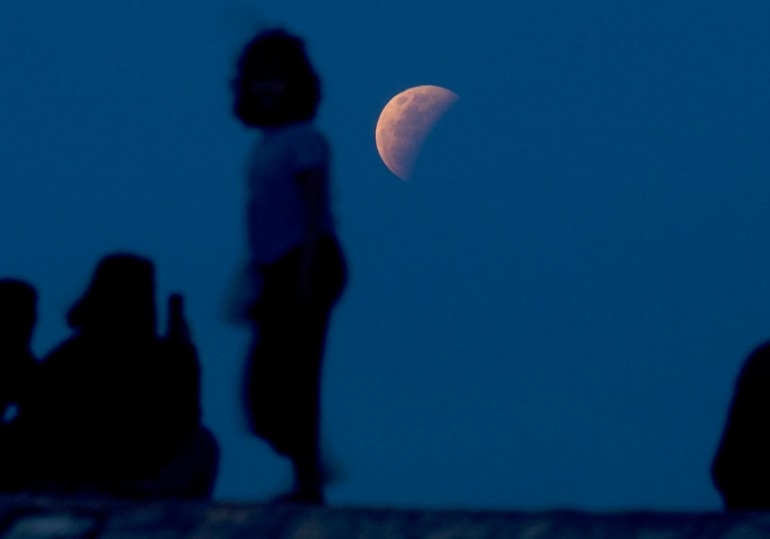 Residents watch the lunar eclipse at Sanur beach in Bali, Indonesia on Wednesday, May 26, 2021. (AP)

The total lunar eclipse, also known as a super blood moon, is the first in two years with the reddish-orange color the result of all the sunrises and sunsets in Earth's atmosphere projected onto the surface of the eclipsed moon. 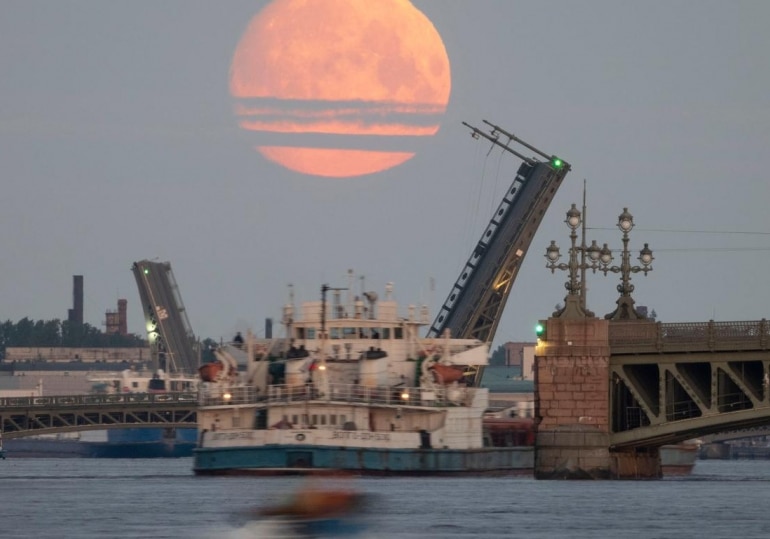 A cargo ship travels past as drawbridges rise above the Neva River, with the moon in the sky, in St. Petersburg, Russia, early Tuesday, May 25, 2021. (AP Photo/Dmitri Lovetsky)

The Partial Eclipse, when the Moon enters and exits the Earth's shadow will be visible in the eastern United States and Canada just before the Moon sets in the morning, and from India, Nepal, western China, Mongolia, and eastern Russia just after the Moon rises in the evening. The moon is partially covered by buildings in Brazil at the start of a total lunar eclipse. Wednesday's eclipse is the first in more than two years and coincides with a supermoon. (AP)

The full eclipse lasted about 15 minutes, while the whole cosmic show lasted five hours. A partial eclipse began as the moon edged into the Earth’s outer shadow, called the penumbra, before moving more fully into the main shadow and then reversing the process.

WhatsApp: Centre Responds To WhatsApp's Allegations Over New IT Rules

After Sushant's Death : 'Suicide or Murder' - Poster of...

Hanging of Nirbhaya Convicts deferred by Court; No new...

Exactly 15 hours before they were due to be hanged, the four Nirbhaya gangrape-murder...

India and China on Friday decided to follow through with steps for "complete disengagement"...

A person in the blood type O group will have antibodies against virus transmission...