In her post, which she deleted later, Suhrita had also mentioned that Rhea used to call Mahesh Bhatt often for counseling and also used to visit him.

The Mumbai Police on Monday will question filmmaker Mahesh Bhatt in actor Sushant Singh Rajput's death case. The basis of interrogation will be primarily over his close associate Suhrita Das' Facebook post on June 14, the day Sushant died by suicide in Mumbai. Suhrita had shared a message for Sushant's actress girlfriend Rhea Chakraborty saying she has seen her "struggle when the actor was suffering from depression".

In her post, which she deleted later, Suhrita had also mentioned that Rhea used to call Mahesh Bhatt often for counseling and also used to visit him.

Screenshot of the now-deleted post has gone viral on social media and it reads:

When the world will be pouring grief for Sushant Singh Rajput and expressing shock and condolence I stand by you firm and strong. Having been a silent spectator to your impossible attempts at trying to keep him together and going... it is my moral duty as a mother and a citizen of this country to tell once and for all that clinical depression is a catastrophe that medical science has no solution or answer to. Every time you came running to the office to seek counsel from Bhatt Saab or spoke to him on the phone I've seen your journey, your struggle.

Can't forget the evening in Sushant's terrace when it almost felt like everything was normal in the world while deep within he was slipping away. Sir saw that that's why he shared the very words his Master UG told him warning him about Parveen Babi, 'walk away or this will take you down under along with.' You gave your everything and more, you did more much more than your bit woman.

Love you my Jalebi. Stay strong." 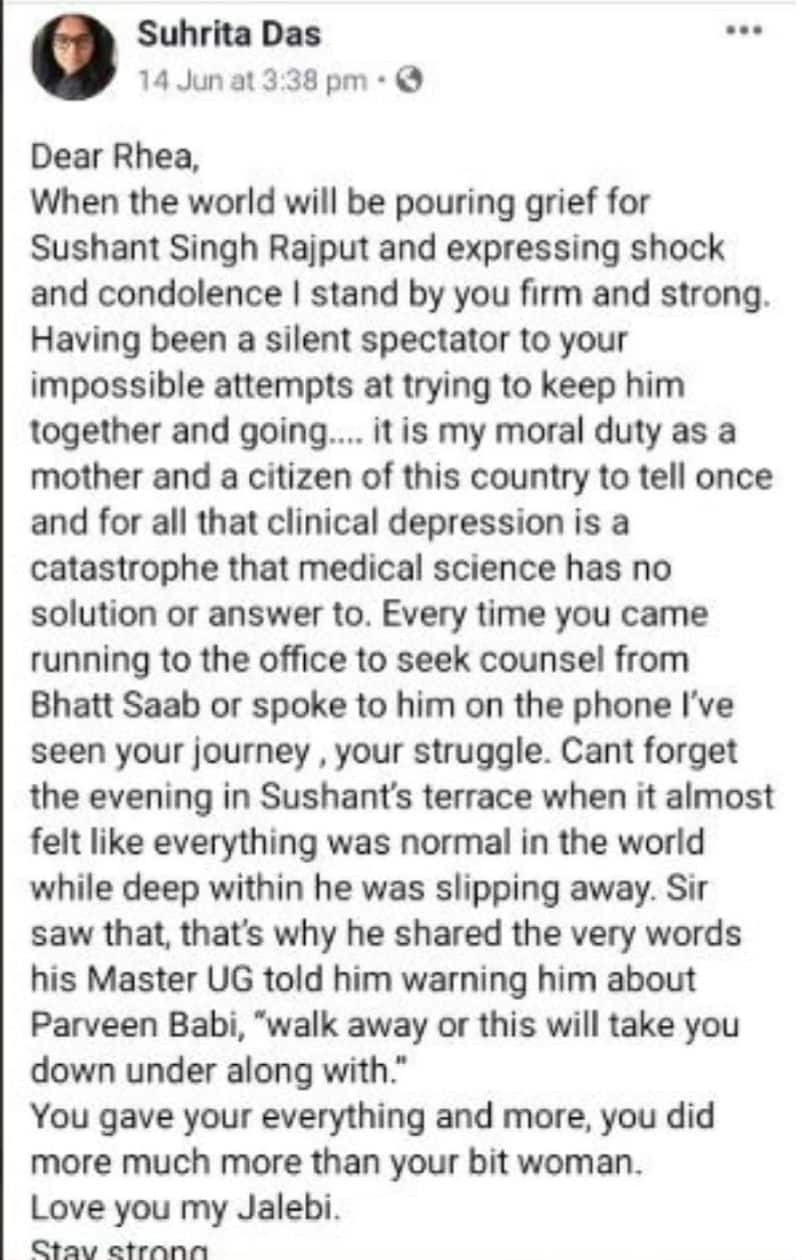 After Sushant's death, Rhea was among the first ones to be interrogated by the Mumbai Police. Later, she wrote to Home Minister Amit Shah requesting a CBI probe into Sushant's suicide case.

As of now, 37 people have been interrogated by the cops. Mahesh Bhatt was summoned on Sunday and he has been called to record his statement in the afternoon. Filmmaker Karan Johar's close associate Apoorva Mehta, the CEO of Dharma Productions, has also been summoned by Mumbai Police.

Social distancing is our only weapon available with us...

8 tourists from Kerala, including 4 kids, found dead in...

They were traveling from Pokhara to take a flight back to India and had made a pitstop...

NEFT transfer available 24x7 from today : Everything you...

Process to repair the 166-year-old Thong Nambonbi (hump bridge) in Imphal city will...