Mr. R N Ravi signed the agreement on behalf of the Centre in the presence of Prime Minister Narendra Modi. The other two signatories were Isak Chishi Swu, who died in 2016 and Thuingaleng Muivah (86) who is leading the talks.

Indo-Naga political talks which has come down in the modern history as the most high profile peace process in Southeast Asia is in a state of simmering tension and reaching the tipping point all because of Mr. RN Ravi’s vitriolic attack on Naga issue, the very issue he was assigned by Prime Minister Mr. Narendra Modi to negotiate on his behalf to bring solution that is honorable and acceptable. All the hard work of 23 years of Indo-Naga political talks having passed through six successive prime ministers is coming to nauseating end because of the mischief that keeps boiling in the hands of this interlocutor who has become more a liability than anything.

The much hyped Framework Agreement (FA) which is the fruition of the recognition of the unique history and situation of the Naga by the Government of India (GoI) was signed in 2015 to form the basis for final settlement of Naga issue. Catastrophic as it is, FA is now undergoing castration at the hands of the very person who co-author it with NSCN Chairman Mr. Isak Chishi Swu and NSCN General Secretary Mr. Th. Muivah. This is the crux of the Indo-Naga political talks now. The issue is now in the court of the Government of India that should come out with an undertaking that FA is still alive in its original form and to be handled by somebody other than RN Ravi, who is sensitive enough to understand and respect what has been achieved during the past 23 years. 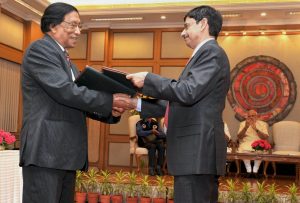 Ironically, the sanctity of Naga political legitimacy comes under assault when Ravi made a tumultuous turn using slanderous terms like “armed gangs” & “underground groups” against the very groups he has been talking for years. The tipping point comes when he ordered the Nagaland state government to issue office memorandum requiring all state government employees to self-declare their relations with the “Naga underground groups”. This is the bone of contention that has cropped up as Naga people cried foul over such outmoded policy that does no longer fit into the present scheme of things to end a century old Naga political issue.

For quite sometimes Ravi was under NSCN’s scanner when he twisted the Framework Agreement and misled the Parliamentary Standing Committee on the steps taken to solve the Naga issue. The fact is that Framework Agreement is outside the purview of Indian Federation/Constitution. But in his report furnished to the Parliamentary Standing Committee he manipulated in his own narrative that is far from the actual meaning as very unambiguously worded in layman’s language in the original copy of FA.

According to the parliamentary report 213, Chapter III Naga Peace Accord index number 3, 1 clause 3.1.4, it read “In 2015, the GoI reached an understanding with the NSCN (IM) which agreed for settlement within Indian Federation with special status. The Interlocutor informed the committee that this was a departure from their earlier position of ‘with India’, not ‘within India’ and the GoI called it Framework Agreement and signed it”.

Again, clause 3.1.18 stated that “Framework Agreement was just about the recognition of uniqueness of Naga history by GoI and an understanding that inclusive settlement will be within the Indian Federation with due regard to the uniqueness of the Naga history. However, the interlocutor stated that it was implied in the agreement that some special arrangement will have to be made for the Nagas”.

For public scrutiny we are constrained to furnish his modified Framework Agreement by removing “new” a single word to suit his interpretation.

Ravi craftily deleted the word “new” from the original to justify his own narrative and circulated to the 14 tribe leaders, NNPGs, NTC and Nagaland GB Federation. These people are simply carried away by his manoeuvrable talkings and made to believe him and portrayed the NSCN on the wrong side. Today, this misplaced interpretation of “it will provide for an enduring inclusive new relationship of peaceful co-existence of the two entities” has become the point of conflict that delayed the process for solution.

Significantly, the word ‘new’ is politically sensitive as it goes to define the meaning of peaceful co-existence of the two entities (two sovereign powers). Further, “NEW relationship” strongly indicates outside the purview of Indian Constitution. When “NEW” is removed there is room for misinterpreting it as under Indian Constitution.

It is a matter of indignation for the Naga people when Ravi went for the perversity as he insulted the NSCN negotiating team using un-parliamentary language in the official talk stating “this can be understood even by Class VII students that it mean acceptance of the Indian Constitution”. The worst official talk took place on 30th January, 2020 at Chumukedima, Nagaland. On the competency that we have submitted he straight away told the NSCN negotiating team that we must have submitted the competency by mistake. He added that it is a stupid and contaminated paper and A to Z he cannot accept unless we rewrite the competency. There would not be any further talk if we do not rewrite and submit the competency he concluded.

NSCN negotiating team cannot forget the unethical deadline given by Ravi to sign the Naga agreement on or before 31st October, 2019. Earlier to this in his diatribe against NSCN he said NSCN has ‘mischievously’ dragged the Framework Agreement and began imputing imaginary contents into it. In this context NSCN put on record that it never adopted procrastinating attitude as repeatedly slandered by Ravi. What matters is the contentious issues that has to be sorted out with mutual respect and understanding. Taking unilateral decision on the timeline is never a part of the negotiation that has travail more than 23 years. Sanctity of the talk must never be sidelined.

Ravi is a person with divisive mentality and has applied it to the hilt among the Nagas. He took the unilateral decision to deviate from what was started by the pioneers of the 2nd Indo-Naga Ceasefire that has taken the peace process this far. From nowhere Ravi created NNPGs as third party/force against the bilateral talk of the GoI and the NSCN. Ravi used to harp on that issue is one, so there will be one solution. But he signed separate agreement with NNPGs and later used this group to counterweigh the NSCN.

Earlier, Ravi in his seeming openness told NSCN negotiating team that he will not have any parallel talks with NNPGs other than to brief them on the core issues discussed and agreed between GoI and NSCN. In his first meeting with NNPGs he simply said that they have nothing, no proposal at all.

There was an occasion during formal talk when we raised the issue of NNPGs whether it should be included in the final settlement. Ravi replied, “I have got written assurance from them that they would never disturb the talk between us. If they try to disturb our talk I can kick them out”. “I have asked them to board”. Now the pertinent question is, what Ravi is going to do with the ‘Agreed Position’ he signed with NNPGs.

Ravi in more than one occasion proved himself as a man lacking principle that stands up to his stature as interlocutor to such high profile political dialogue as he committed breach of confidential documents by circulating the doctored Framework Agreement and Competencies to the Naga leaders that he favored after removing a word “NEW” that virtually changed the meaning of a sentence in the Framework Agreement. He hastens himself to misinform and mislead the GoI as well as Naga people in various platforms by twisting the Framework Agreement.

Again, the reason why NSCN have refrained from publishing the FA was respecting the tacit understanding reached between the two sides not to release to the public domain for security reasons of India. However, Ravi took undue advantage and started modifying and manipulating the FA in his own narratives which began to mislead the Nagas as well as the GoI.

Ravi also resorted to fear psychosis to pressurize the NSCN to submission. He organized military exercises over Naga areas using Indian Air force’s latest aircrafts, deployed heavy security forces with war tanks, directing all Nagaland state security forces to be in their respective stations with rations stock to last for at least two months and directing all state police Special Branch to identify and locate the NSCN members’ residents.

In the Naga political movement it is needless to say that Naga civil organizations played a crucial role in their respective capacities. But Ravi refused to work with Naga apex civil societies like the Naga Hoho, NSF, NMA, NPMHR, etc. He only entertained his “yes men groups” and few selected individuals who are docile enough to serve as his mouthpiece and trumpet in the media.

What has driven Ravi to go for the unthinkable after more than 23 years of fruitful negotiations is now the focusing point of talk in every hearth and street corners. How could Ravi arrogated to himself the power to change the rules/contents of the agreement arbitrarily? Where is his credibility now? His domineering approach has come to destroy the spirit of gentlemen’s negotiation.

It was against this background that Ravi has set the bridge on fire and the meeting point is something unthinkable. He should have been more sober with the NSCN with whom he has shared the same table for years to find the honorable means to solve the Naga issue. It is comprehensible that person who want to turn the clock back the Naga issue by forcibly making it into “law and order issue” cannot be expected to recapture Naga people’s imagination to bring solution that is honorable and acceptable.

NSCN is grateful to the Prime Minister Mr. Narendra Modi who guided and supervised the signing of the historic Framework Agreement by giving the ceremony a high profile status. But the very doings of his representative Ravi has cast a huge trust deficit as his role has come to be seen as nothing short of disowning the Framework Agreement.

NSCN, has, however, gracefully and patiently tolerated Ravi despite his act of profanity. Let truth and sanity prevail to take control of Indo-Naga political negotiations and let God be the judge.

Russian Covid Vaccine : Why Russian vaccine is a long way from being available in...

Covid Vaccvine Race : RUSSIA'S Vaccine, Sputnik 5 Is Not A Part Of WHO'S List Of...

11 Indian Actresses Who Were Caught In Sex Racket: Know...

Should I cancel my flight? Will recirculated air on a plane...

Over the past two days, Mumbai, Ahmedabad, Chennai, Thane, and Ariyalur (Tamil Nadu)...

While Assam, which was the epicentre of the protests over the past few days, was...

MANIPUR : A Land Of Heavenly Cuisines and Elegant Food...

The culinary fare of this region reflects the intimate connection of its people...

With 1,018 cases of COVID-19, Maharashtra has reported the highest number of infections,...