LOCKDOWN 2.0 : E-commerce Companies Not Allowed Delivery of Non-essential Items During Lockdown 2.0 as Govt revises guidelines today; Everything you need to know.

The government has revised the list of economic activities and services to be allowed from Monday in parts of the country least affected by the novel coronavirus outbreak.

The government has revised the list of economic activities and services to be allowed from Monday in parts of the country least affected by the novel coronavirus outbreak.

As per a Home Ministry order released today, the supply of non-essential goods by e-commerce companies has now been prohibited during the lockdown period. The supply of such goods - like mobile phones, laptops, television sets and refrigerators - had been permitted by the government last week.

Among economic activities and services to be functional are health services (including Ministry of AYUSH) and non-banking financial corporations and micro-finance institutions marked essential services.

Most significantly, a list released by the government after a Group of Ministers (GoM) meeting on Saturday confirmed that all agriculture and horticulture-related activities will be allowed; this was after some chief ministers warned of approaching harvest season and the potential of bumper wheat crops.

The fishing industry (both inland and marine) and the aquaculture industry will also be permitted to function, as will the animal husbandry sector.

Plantation activities, such as those related to tea, coffee and rubber, will be re-opened with a maximum of 50 per cent of employees working at any given time, the government said. Coconut, spice bamboo, areca nut and cocoa plantations, and forest produce by scheduled tribes have also been added to the list.

Construction, in rural areas, of water supply and sanitation, and laying of power lines and telecom optical fibres and cables will also be allowed, according to the home ministry.

The re-opening, albeit in a limited manner, of construction will be good news for the lakhs of unemployed migrant workers and daily labourers who had been left jobless by the ban on activity in this sector under the lockdown ordered by Prime Minister Narendra Modi.

All re-opened factories and workplaces, however, will be required to adhere to guidelines regarding social distancing released by the government last week.

Here is a list of what will remain open all over India with effect from 20th April 2020.

This will NOT be applicable in the containment zones.

Let us all fight together against #Covid19#IndiaFightsCorona#StayHomeStaySafe 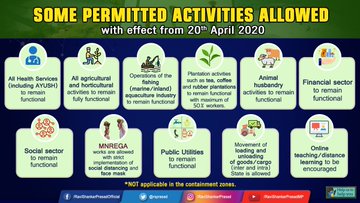 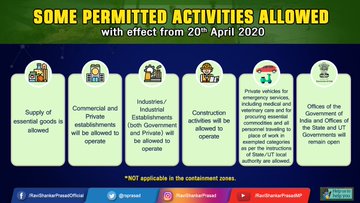 1,379 people are talking about this

Here is a list of what will remain open all over India with effect from 20th April 2020.

This will NOT be applicable in the containment zones.

Let us all fight together against #Covid19#IndiaFightsCorona#StayHomeStaySafepic.twitter.com/d1EG0CMEOa

Following are other services that will stay open from April 20:

CORONAVIRUS IMPACT : Donald Trump warns China, there should be consequences if Beijing...

LOCKDOWN 2.0 : No inter-state movement allowed for stranded labourers; Workers to...

Many Died in a Stampede At Funeral Of Iran General Qassem...

Normal life has been hit in Assam and other Northeastern...

Curfew has been relaxed from 8am to 1pm in Guwahati and...

The state has been reeling under a raging protest over citizenship law, which came...

The profits have motivated the farmers to go into early harvest. Due to which, the...

Violent protests continue unabated in Assam and Tripura even a day after Rajya Sabha...

International Tourism Mart’ is being organized at Imphal, the capital city of Manipur...

Canada embassy issued a travel advisory on Saturday for its citizens requesting...