President Trump to Iranian protesters: 'My Administration will continue to stand with you'

The U.S. intelligence community increasingly believes that the Ukraine passenger jet that went down after takeoff in Iran was accidentally struck by a Russian-made missile; national security correspondent Jennifer Griffin reports.

Protesters in Iran's capital, Tehran, have demanded the resignation of senior leaders following the admission of authorities - after days of denials - that Iranian forces accidentally downed a Ukrainian passenger plane, killing all 176 people on board.

The Ukraine International Airlines flight PS752 bound for Kyiv, Ukraine crashed minutes after takeoff from the Imam Khomeini International Airport in Tehran on Wednesday. It happened hours after Iran launched missile attacks on US forces in Iraq in retaliation for the US  assassination of top Iranian commander Qassem Soleimani.

Twitter users criticised Trump for saying he stood in solidarity with the Iranian people, noting that he previously threatened to attack 52 Iranian sites "very hard" as tensions between the two nations escalated earlier this month.

How about you sit down and mind your own business?!" one Twitter user said.

Yes we saw how you stood with us when you threatened our cultural sites, starved Iranians with sanctions, and banned us from entering the US. How about you sit down and mind your own business?!
بشین بابا! 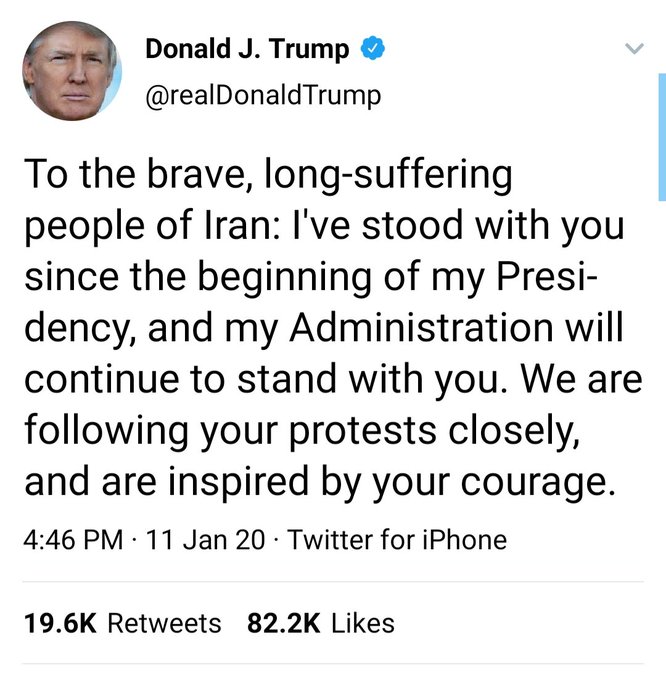 Russian Covid Vaccine : Why Russian vaccine is a long way...

A grey-haired man wearing a face mask lies dead on the pavement at ground zero of...

BENELLI recently launched the BS6-compliant TRK 502 in India, that retails alongside...

Students : Flipkart Seeks Interns For 45 Days And It Will...

Flipkart is seeking students who can work in its supply and logistics chain as interns...

The state’s capacity to test for Covid-19 has substantially increased to about 200...

The Information and Technology Ministry on Wednesday banned the hugely popular gaming...