Anti-CAB protests in Assam: Guwahati under curfew for indefinite time

The curfew was imposed in Guwahati at 6.15 pm and will be in place till 7 am on Thursday

Police trying to disperse the protesters 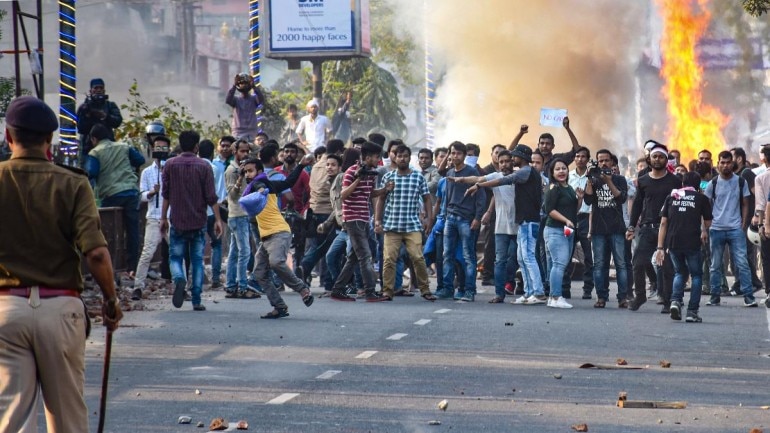 Curfew imposed on Wednesday in Assam's Guwahati was extended till indefinite period, amid violent protests against the Citizenship (Amendment) Bill, a senior police official said.

The curfew, which was imposed at 6.15 pm, has been extended till indefinite period, Assam Police Additional Director General (Law and Order) Mukesh Agrawal told PTI.

"We will periodically review the situation and take the decision to lift it accordingly," he added.

Earlier, Assam Police Director General Bhaskar Jyoti Mahanta said the curfew will be in place till 7 am on Thursday.

Tens of thousands of protesters against the CAB descended on the streets of Assam, clashing with police and plunging the state into chaos of a magnitude unseen since the violent six-year movement by students that ended with the signing of the Assam accord.

Though no party or student body has called a shutdown, protesters, a majority of them students, fought pitched battles with security forces in the restive state, including in front of the secretariat, the seat of the BJP government.

Assam smouldered with protests on the day the Citizenship (Amendment) Bill is being hotly debated in the Rajya Sabha after its passage by the Lok Sabha.

The Citizenship (Amendment) Bill, 2019, which has already been approved by Lok Sabha, proposes to give citizenship to Hindus, Christians, Parsis, Jains, Budhists and Sikhs facing religion persecution in Pakistan, Bangladesh and Afghanistan.

With a comfortable margin the Rajya Sabha passed the Citizenship Amendment Bill...

NESO calls for North East bandh on 10 Dec against Citizenship...

US President Donald Trump's administration has increasingly gone global against...

All issues such as excessive rubber deposits, water stagnation and cracks that were...