A team from the National Disaster Relief Force (NDRF), fire fighters and local volunteers are also on ground, trying to contain the wildfire that started on December 29.

A team from the National Disaster Relief Force (NDRF), fire fighters and local volunteers are also on ground, trying to contain the wildfire that started on December 29. 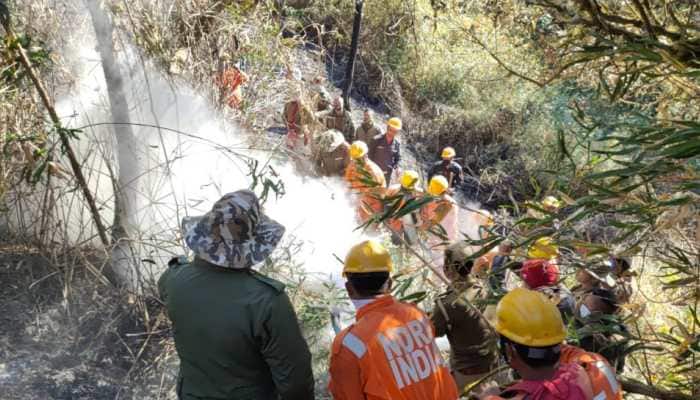 The Indian Air Force chopper has been carrying out operations for past three days, flying out from Dimapur in Nagaland.

The centre has assured all necessary help to combat the massive blaze that started in Nagaland five days ago and has since spread to its neighbouring state. On Saturday, the centre airlifted an NDRF team to the Manipur side of Dzukou Valley where over 200 firefighters of the state fire service are on ground battling the fire.

According to officials, state's firefighters have been able to partially control the forest fire in the picturesque Dzukou Valley. But, the wildfire on the southern side is yet to be brought under control, they added.

Officials of both state, Nagaland and Manipur, have claimed that by now the wildfire is expected to have destroyed much of the pristine forest, and harmed the rich biodiversity of the valley, which is a globally famous trekking site.

The forest fire had started earlier this week from the Nagaland side of the forest and shifted to the Manipur side. After the fire spread, the Manipur government had sought the assistance of the Indian Army and the NDRF. On Thursday, the Manipur Chief Minister had conducted an aerial survey.

A day later, when the blaze could not be brought under control by the state forest and fire service officials, Union Home Minister Amit Shah had called the chief minister.

CommentsThe Nagaland State Disaster Management Authority is yet to confirm the cause of the wildfire.

(Only the headline and images in this report may have been reworked by the Kangla Times staff; the rest of the content is auto-generated from a syndicated feed.)

Covid Vaccine : Much Awaited COVID VACCINE could be ready...

Candle Lighting on Sunday : Here's how power system will...

AIR INDIA : The government on Monday announced sale of...

This is the second time in less than two years that the government has come out...