US-India partnership truly stronger than ever before. The visit was great; We will remember welcome accorded to us, says Donald Trump

"Thank you very much, Mr President and Prime Minister. It has been a very special day. We will miss you all and we will be back"

Delhi: US President Donald Trump and First Lady Melania Trump received at Rashtrapati Bhawan by President Ram Nath Kovind and his wife Savita Kovind. A dinner banquet will be hosted by the President in the honour of the US President. 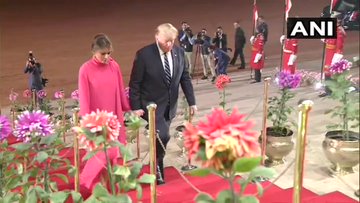 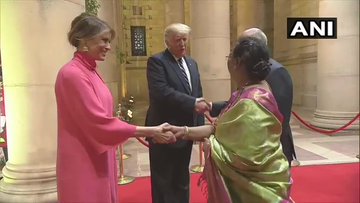 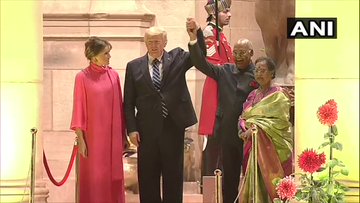 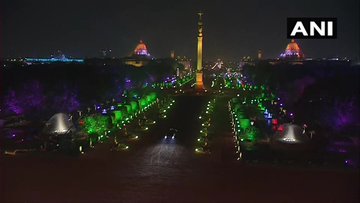 127 people are talking about this

Discussed Pakistan with PM Modi; I have good equation with Pakistan PM Imran Khan, they are working to control cross-border terrorism

Don't want to discuss, says Trump as he parries reporter's query on CAA

If trade deal doesn't happen, it will be something else; but it will be satisfactory: Trump

We have a massive trade deficit with India. We shouldn't have a $24 billion deficit: Trump

But we are working on resolving the issue. We will have a trade deal, says US President

Ready to mediate between India and Pakistan on Kashmir, says Trump

PM Modi is a very religious and calm man. But he is actually a very tough person. I have seen him in action. And terror is foremost on his mind; he will take care of it, says Trump

US President on violence in northeast Delhi and CAA 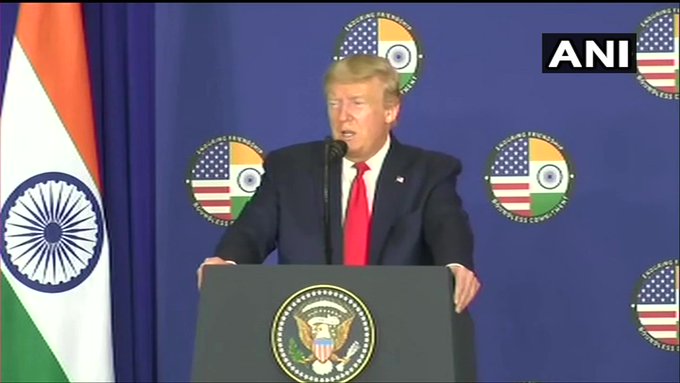 852 people are talking about this

"Nobody else that came here got the reception that I got yesterday. We had thousands of people outside (the stadium). That was an incredible scene," says the US President

'Spoke to PM about religious freedom'

"We killed al-Baghdadi a few months ago. Qasem Soleimani is gone. Hamza Bin Laden (Osama's son) is gone. Nobody has done more than what I have done. But at the same time Russia, Iran, Iraq and Syria should do it too."

Spoke with PM Modi today on this. India would like to see peace pact in Afghanistan

India buying a lot of military hardware from the US: Trump

They (people of India) like us more now than they ever liked us, says the US President

We had great meetings, will head to state dinner soon: Trump

It was a fantastic two days, says Trump

'Issue of CAA didn't come up'

Issue of CAA didn't come up; appreciation from both sides that pluralism, diversity binding factor: FS on talks on CAA, religious freedom

India-US close in on "big deal"

President Trump and Prime Minister Modi decided to move towards what was referred to as "big deal" in trade sector, says foreign secretary

Some of the regulations have to go through statutory process; we are going to reduce a lot more regulations, says Trump

Democrats are radical, out of control: Trump

Markets will soar when I win: Trump

Markets will jump thousands of points when I win, says Donald Trump

We are going to win the elections: Trump

I feel I am going to win the coming elections; when we win, markets will go up, says Donald Trump

US prepared to tackle Coronavirus: Trump

China is working very hard, I have spoken to President Xi. It looks like China is getting it under control. We are fully prepared to tackle Coronavirus, says Trump

What we have done on healthcare is phenomenal, says Donald Trump

Students of Sarvodaya Co-education Senior Secondary School in Nanakpura here on Tuesday gifted Madhubani paintings made by them to First Lady of the United States, Melania Trump. Melania visited the school early today and interacted with the students and teachers for around 30 minutes.

What kind of gift would impress Trump?

What kind of gift would impress President Donald Trump? For Vietnam Prime Minister Nguyen Xuan Phuc, the answer was: a gold-framed portrait of Donald Trump. France’s Emmanuel Macron gave Trump a Louis Vuitton golf bag and some photographs valued together at $8,275.

India and US ink 3 pacts

India and the US on Tuesday inked three MoUs, including one in energy sector, as Prime Minister Narendra Modi asserted that the two countries have decided to take Indo-US ties to comprehensive global partnership level.

US exports to India up nearly 60%: Trump

Our teams have made tremendous progress for a comprehensive trade agreement & I'm optimistic we can reach a deal of great importance to both countries. Since I took office, US exports to India are up nearly 60% & exports of high quality American energy have grown by 500%, says Trump

India-US ties stronger than ever: Trump

US-India partnership truly stronger than ever before. The visit was great; We will remember welcome accorded to us, says Donald Trump

During our visit we discussed the importance of a secure 5G wireless network & the need for this emerging technology to be a tool for freedom, progress, prosperity, not to do anything with where it could be even conceived as a conduit for suppression & censorship, says Trump

In our discussions, PM Modi and I affirmed our two countries' commitment to protecting our citizens from radical Islamic terrorism. In this effort the US is also working productively with Pakistan to confront terrorists who operate on its soil, says Trump

Earlier today we expanded our defence cooperation with agreements for India to purchase more than $3 billion of advanced American military equipment, including Apache & MH-60 Romeo Helicopters - finest in the world. These will enhance our joint defence capabilities, says Trump

Melania and I have been awed by the welcome, says Donald Trump

Our commerce ministers have had positive talks on trade. Both of us have decided that our teams should give legal shape to these trade talks. We also agreed to open negotiations on a big trade deal. At the global level, our relationship is depended on the similar democratic values we share.says PM

India and USA resolved to step up efforts to make those who support terrorism, responsible, says PM

It was established again yesterday that relations between India and US aren't just between two governments, but are people-centric and people-driven. These relations are very important for the most important relationship of the 21st century, says PM Modi

Spoke about all aspects of India-US ties: PM

The unprecedented and historic welcome of President Trump at Motera yesterday will always be remembered, says PM Modi

Before I leave today want to thank educators for setting a positive example, Melania said.

The Delhi Traffic Police, on Tuesday, issued advisory in view of the US President Donald Trump's two-day India visit, owing it to security reasons. "From forenoon till around 4 p.m. on February 25, traffic is likely to remain heavy in the areas of Moti Bagh, Chanakyapuri, India Gate, areas around ITO, Delhi Gate and adjoining areas of Central and New Delhi. Necessary Traffic diversions as per the ground situation may also be enforced," Delhi Traffic police tweeted.

In his opening remarks, US President Donald Trump said that the "Namaste Trump" event at Motera was a great honour and that the crowd cheered everytime he mentioned something about Prime Minister Narendra Modi. Great honour to see thousands of people gathered to welcome me, people love you, Trump said.

US First Lady Melania Trump arrived at a government school in south Delhi on Tuesday to attend a session of the 'Happiness Class'. She was greeted by young students, who garlanded her and also applied 'teeka' on her forehead.

Excited students dressed in traditional attires waited patiently for US First Lady Melania Trump at a Delhi government school in south Moti Bagh area, even as teachers and staff members scurried around to make the day perfect for the visiting dignitary.

Donald Trump arrived at Hyderabad House for bilateral talks with PM Narendra Modi. Tuesday's talks between Modi and Trump are likely to send across a clear message of growing congruence of interests between India and the US on major geopolitical developments in the region and beyond, particularly when China has been expanding its military and economic clout.

New Delhi's iconic Hyderabad House is all decked up to host the bilateral talks between Prime Minister Narendra Modi and US President Donald Trump. The building was adorned with flags of India and the US.

Democratic presidential front-runner Senator Bernie Sanders on Monday slammed President Donald Trump for selling weapons to India, saying that the US should instead partner with New Delhi to fight climate change to save the planet. 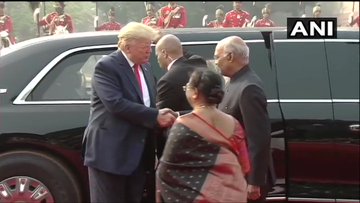 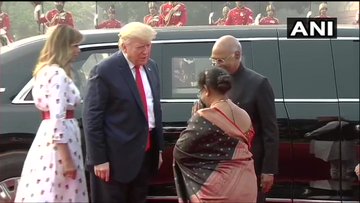 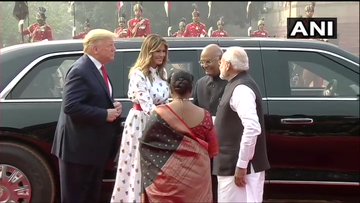 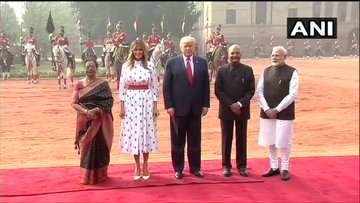 127 people are talking about this

Delhi: US President Donald Trump's daughter and senior advisor Ivanka Trump arrives at Rashtrapati Bhavan ahead of the ceremonial reception of the US President. 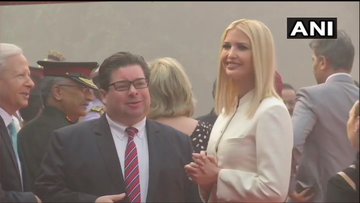 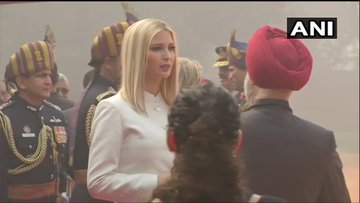 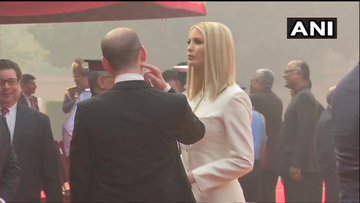 123 people are talking about this

Trump to be given ceremonial welcome

The US President will get a ceremonial welcome at the forecourt of Rashtrapati Bhavan at 10:00 am followed by a visit to Rajghat where he will pay tributes to Mahatma Gandhi. He will lay the wreath at Rajghat and observe one-minute of silence. He will also be signing the Visitors' Book. Read full story

US First Lady Melania Trump will visit a Delhi government school in Delhi's Nanakpura on Tuesday. She will visit the Sarvodaya Vidyalaya Senior Secondary School where she will review the "Happiness Class" programme implemented by the Delhi government.

I firmly believe India and the US are natural partners. We can make an effective contribution to peace, progress and security not just in the Indo-Pacific region but in the world as a whole,” the PM said.

"Our relationship with Pakistan is a very good one. Thanks to these efforts, we are beginning to see signs of big progress with Pakistan and we are hopeful for reduced tensions, greater stability and the future of harmony for all of the nations of South Asia,'' he said.

Love will be in the air at Prez dinner today

When US President Donald Trump and First Lady Melania Trump sit down to a ceremonial dinner at Rashtrapati Bhavan on Tuesday evening, the hors d’oeuvres will be brought out to the strains of Eric Clapton’s “You look wonderful tonight” and Elton John’s “Can you feel the love tonight”.

Nitin Kumar Singh, Tour Guide, Ministry of Tourism: I gave every minute detail of the Taj Mahal to US President Donald Trump and the First Lady. 'Incredible' was the first word they uttered after seeing the Taj Mahal. President & the First Lady have promised to visit once again. 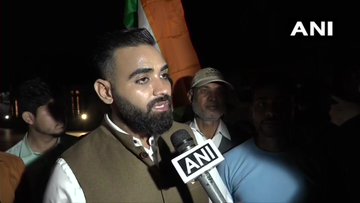 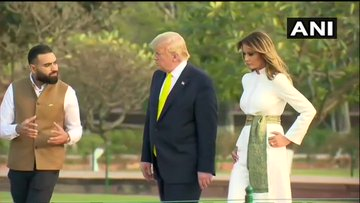 324 people are talking about this 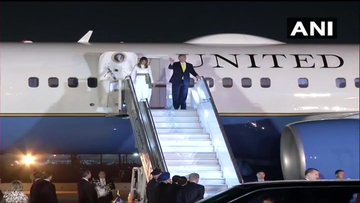 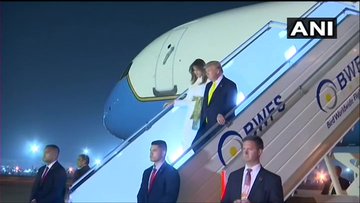 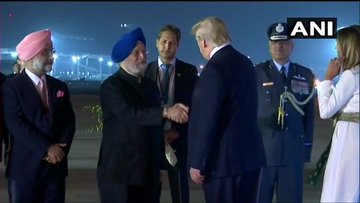 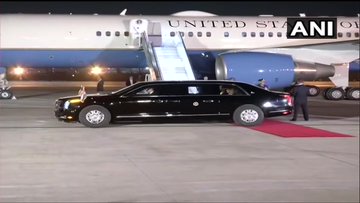 124 people are talking about this

Manmohan to skip banquet for Trump 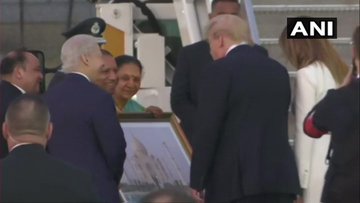 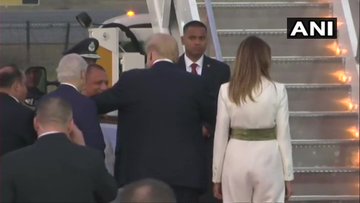 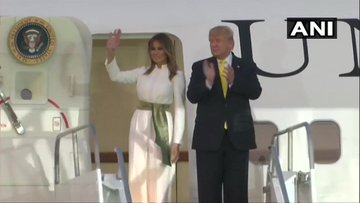 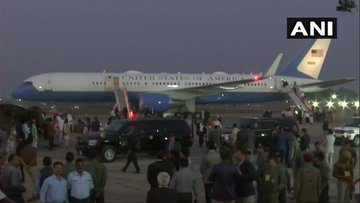 199 people are talking about this

All roads leading to ITC Maurya, the hotel which will host US President Donald Trump, have been fortified with snipers, elite SWAT commandos and sharp shooters on high-rise buildings, officials said.

Trump will now head to Delhi

'This is why I came to India ...': Trump tweets in Hindi again 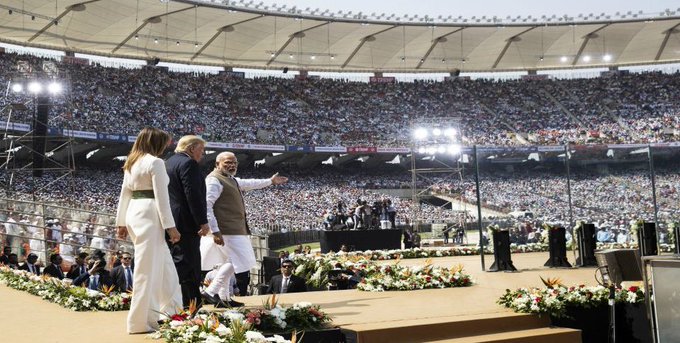 32.6K people are talking about this

AIR INDIA : The government on Monday announced sale of...

The coalition Ministry in Manipur is likely to face a no-confidence motion on the...

The COVID-19 vaccine candidate developed by Oxford University and AstraZeneca is...

The signatories include scientists from TIFR, Mumbai, NCBS, Bengaluru, the IITs,...

The whole city will not "probably" be closed down and the state government will...