Due to the shortage, it’s easier for people to get a single dose rather than both doses — given that the recommended gap has been extended to as many as 12 weeks for Covishield.

Two doses of Covishield vaccine produced more antibodies than Covaxin doses, but there were relatively fewer instances of ‘breakthrough infections’ after the latter, reports a study of healthcare workers (HCW) in India.

The study is being peer-reviewed and has been submitted to a journal but appears as a preprint in MedrXiv, an online repository, and is among the few studies of the real-world effectiveness of vaccination in India. 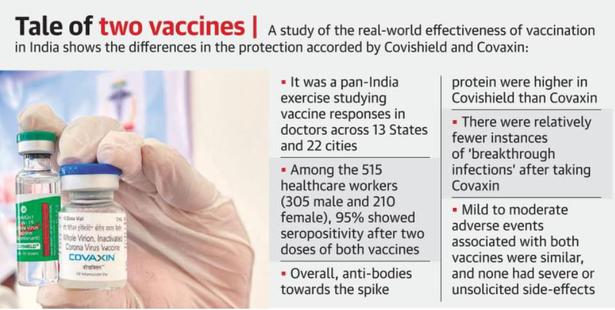 The study, by a collective of doctors, shows that none of the participants, who were also all doctors and got both doses of vaccines, were ill and only about 6% tested positive at different points of the vaccination schedule. While both vaccines were protective, there were differences in the protection accorded by a single dose of the vaccines.

Due to the shortage, it’s easier for people to get a single dose rather than both doses — given that the recommended gap has been extended to as many as 12 weeks for Covishield.

For the study, 515 healthcare workers from 13 States and covering 22 cities were evaluated from January to May 2021. Their blood samples were also tested for the presence, quantity of antibodies produced and levels of the specific antibodies that are directed to the spike protein of the virus, widely held to be a proxy of protection.

A single dose of Covishield elicited about 10 times the antibodies than Covaxin whereas a second dose narrowed the gap somewhat, with Covishield-triggered antibodies about six times that of Covaxin-stimulated ones, the study found.

“Contrarily, Covishield showed a good seropositivity rate and a 4-fold rise in median antibody titre even after a single dose,” the authors note.

Overall, 97.8% of those who never had COVID and had two complete doses of Covishield had detectable levels of antibodies, or tested seropositive, compared to 79.3% with Covaxin. It is important to note that of the 515, only 90 got Covaxin. Covishield constitutes the overwhelming majority of vaccines administered in the country with nearly nine persons getting it for every one of Covaxin.

Though the spike protein remains the key target of most vaccines, ICMR and Bharat Biotech, the makers of Covaxin, have previously said that being a vaccine made out of an inactivated virus, it elicited a ‘broader immune’ response, meaning antibodies aimed at different parts of the coronavirus to neutralise it. T-cell immunity, that is reported to elicit a longer lasting protection wasn’t measured in the study.

While real world efficacy data of Covaxin and India-centric data on Covishield isn’t public yet, recent studies have shown that most vaccines — including Covaxin and Covishield — have reduced response to some coronavirus variants such as B.1.617.2 or the Delta variant.

The study authors also evaluated the relationship of immune response to gender, a history of testing positive for COVID prior to vaccination and co-morbidities.

Dr A.K. Singh, of the GD Hospital and Diabetes Institute, Kolkata and among the authors of the paper, said the greater number of infections after the second wave was probably due to the increased number of cases after April and the high exposure of the study participants — all doctors in COVID hospitals — to patients during the second wave.

The study will continue in the months ahead to evaluate if antibody levels declined, Dr. Singh told The Hindu.

There was no significant difference in seropositivity rate when compared by age, sex, Body Mass Index (BMI), blood group and any comorbidities including its duration and treatment. Participants who had Type2 diabetes and hypertension for over five years were less likely to have detectable antibodies than those without either condition or detected fewer than five years ago, the authors report.

As per Ministry figures, the highest number of cases are from Maharashtra, Kerala...

Dr Harish Shetty, who’s a known psychiatrist, talks about the pressure that artistes...

The national lockdown, announced by Modi in an address on 24 March, is meant to...

The total number of coronavirus cases in India has crossed the 1.5 lakh mark, with...

Appropriately priced Vivo iQOO 7 Legend stands out from the rest with its attractive...

OnePlus 9 Pro Review : Not Only A Beast ,The Smartphone...