CBSE Board Exams 2021 Start May 4, Results On July 15; See The Announcement

"The board exams for Class 10 and 12 will be conducted from May 4 to June 10. Schools will be allowed to conduct practical exams from March 1.

Class 10 and 12 final exams for schools affiliated to the Central Board of Secondary Education (CBSE) will be held from May 4 to June 10 and results will be announced on July 15, Union Education Minister Ramesh Pokhriyal Nishank announced on Thursday.

"The board exams for Class 10 and 12 will be conducted from May 4 to June 10. Schools will be allowed to conduct practical exams from March 1. Date sheet for both the classes will be issued soon. The results will be declared by July 15," Mr Pokhriyal announced.

The three-month delay because of the coronavirus pandemic sparked concerns about the impact on college admissions, especially for those intending to study abroad.

Usually, practical tests are conducted in January and theory exams begin in February and conclude in March.

Mr Nishank had last week ruled out conducting the board examinations till February in view of the COVID-19 situation.

With no clarity on the board exam dates, several schools had already conducted pre-board exams online to keep the students prepared.

The CBSE had announced earlier this month that board exams in 2021 will be conducted in written mode and not online.

Schools across the country were closed in March to contain the spread of the COVID-19 pandemic. They were partially reopened in some states from October 15.

However, a few states have decided to keep them closed in view of a spike in the number of infections.

This year's board exams had to be postponed mid-way in March. They were later cancelled and the results announced on the basis of an alternative assessment scheme.

Here is the compete CBSE notification announcing the dates: 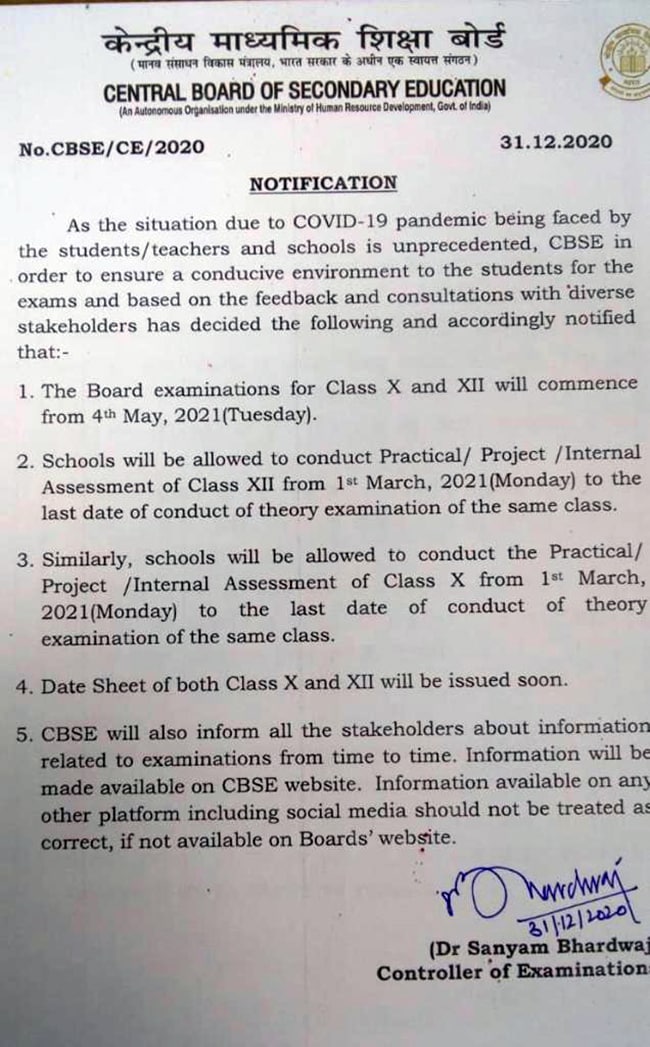 (Only the headline and images in this report may have been reworked by the Kangla Times staff; the rest of the content is auto-generated from a syndicated feed.)

Which is the Best School in Jaipur, Rajasthan in 2020?

Explained : How Covid-19 Vaccines Will Be Distributed In...

In India, the VK Paul committee on vaccine administration will engage with all stakeholders...

Manipur has announced stringent measures to curb the spread of Covid-19 disease...

The high court said he has a choice to make and asked him to delete his Facebook...

India's coronavirus epidemic is now growing at the fastest in the world, increasing...

Iran Will Welcome Any Peace Initiative By India For De-escalating...

"We are not for war, we are looking for peace and prosperity for everybody in this...

6 killed In Violence Across Uttar Pradesh During Citizenship...

Six protesters were killed in clashes that erupted across Uttar Pradesh over the...